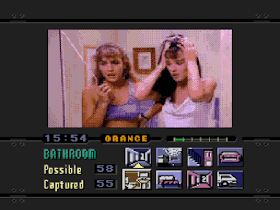 Before swap CD, save state to file, next CD, upload save state file, press button in game to resume.
Genre: Puzzle
Perspective: 1st-person
Art: Full Motion Video (FMV)
Interface: Point and select
Narrative: Horror
Published by: SEGA of America
Developed by: Digital Pictures
Released: 1992
Platforms: SEGA CD / Mega-CD, 3DO Interactive Multiplayer, DOS
It was one of the first game that used FMV, so it was great at the time. In the game you have to watch eight cameras. A group of girls stay with Mr. and Mrs. Martin for the night. Martin's family seems like an ordinary American family. Although, strange things happen in their house. Earlier, five girls left in their house disappeared. The Sega Control Attack Team must protect the new guests and find out what happened. A new wave of girls arrive for the bachelorette party (one of them is SCAT's undercover agent Kelly, played by Dana Plato). Vampires begin to invade Martin's house, if by the end of the game you save all the girls and catch the vampires, Kelly learns that Martin's family is also a family of vampires.
You need to monitor the house and the street using eight cameras located in the house. You have to switch among them, and observe all. To activate the trap, you need to wait until the school located below is completely filled. Then activate the key to the trap, which is a color. You can find out which key to use from the conversation.
Although the game does not contain any explicit scenes, it was considered an adult game. The US game has been censored.
‹
›
Home
View web version