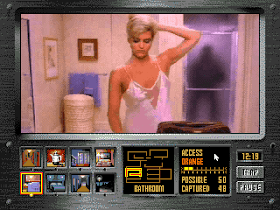 Genre: Puzzle
Perspective: 1st-person
Interface: Point and Select
Art: Full Motion Video (FMV)
Narrative: Horror
Published by: Digital Pictures
Developed by: Digital Pictures
Released: 1994
Platforms: DOS, 3DO Interactive Multiplayer, SEGA CD / Mega-CD
The game in the genre of Interactive Movie, a kind of movie in which you - one of the main characters and of your actions depends on the outcome of the plot.
Five women remain with Mr. and Mrs. Martin. Martine, at first glance, the ordinary American family, but in the house, strange things happen. Five girls, before gostevavshih in the house, disappeared without a trace, and the team SCAT (Special Control Attack Team) has been involved in order to protect the new guests from anyone else and figure out what happened. Once the new company comes guests (one of which - a secret agent SCAT, Kelly Maddy, played by Dana Plato), making their way into the house augurs - zombie vampires.

Here is his description

The essence of the next game. Somewhere on the shores of the lake is a beautiful house belonging to Martin, the ordinary at first glance, the American family. In this house, lost five men. The operation to investigate the case was assigned to the team SCAT - Special Control Attack Team. During a search of the house was found a strange system of cameras and traps. At the time, decided that perhaps it is a peculiar system of protection. You have to protect under commander Simms next five girls (one of which Kelly Maddy - SCAT undercover agent), driving these traps with a remote control. The goal - to trap all enemies - in particular augurs - but do not allow to enter them good.

The greatest pleasure of the game "Night Trap" can be obtained simply by reading the room, until you see that something is happening. Then you can overhear the conversation. You can also switch from room to room to monitor the movements of the characters. The only problem with the wiretap, is that the way you never did not finish the game. To enjoy the colorful finale game, you have to have a perfect result - the number caught you and the number of possible Ogres should be the same. If you will miss at least one Ogre. "Good" is not fully get it. To catch all 95 of the moat, you'll have to keep accidents schedule, which will indicate the time, the room and the amount of Ogre. captured at every moment. If you miss out on the Ogre, then you hear a dial tone. When you hear it, quickly look through all the rooms to find the Ogre, who missed. Then, remember that time and place, so to catch it next time. There are also some situations in which you'll have to defend any of the girls or catch two ogres in one room - one after the other.
The best way to shut the trap - is to press and hold the "B" for as long as the mark pointer becomes red. Do not press the button too early, otherwise you can not turn on the trap. Release the "B" when the counter caught Ogres will flash, then press START, to make the game a break and look at the floor plan of the building. Feel free to use it (by the way, it does not count.) Good luck!