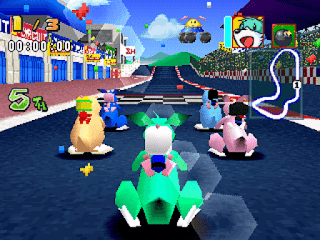 Genre: Action, Racing / driving
Perspective: 1st-person, Behind view
Interface: Direct control
Published by: Atlus Software Inc.
Developed by: Graphic Research Co.
Released: 1999
Platform: PlayStation (PSX, PS1)
After choosing a jockey, players begin to race on ... kangaroos or dinosaurs, which run along seven bizarre paths, avoiding obstacles and projectiles that are thrown by rivals. Other obstacles encountered on the ground are bottomless pits, sharp turns, etc. - everything is just like in ordinary Go-Kart Racing, except perhaps not on wheels, but on foot, or rather on the legs of a strange animal that the developers have prepared for you. Win a couple of races or collect enough trophies, and then with the money earned by hard work, you can buy a ticket to participate in the next competition (there are seven of them, plus one promotion) or better throwing projectiles, or change the three-legged ... kangaroo (or mini-dinosaur) , on which the race began, on a "horse" fresher and more energetic. Bomberman Fantasy Race also has a split screen option and a pretty good betting system for race participants.
If in general the game makes a good impression, then the control is just a problem, you probably won't even immediately guess that to increase the speed you will have to constantly press the Forward button to increase the speed, besides, your "nag" does not want to go where it needs to go and turn on time, in the right place turns into torture.
‹
›
Home
View web version