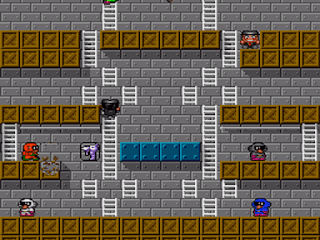 Genre: Action, Puzzle
Perspective: Side view
Gameplay: Platform
Interface: Direct control
Published by: Hudson Soft Company
Developed by: Hudson Soft Company
Released: 1993
Platform: TurboGrafx / PC Engine
This enhanced version of the acclaimed Lode Runner series includes a competitive play mode for five players. A group of malefactors managed to steal a mountain of gold from the Time Machine Research Center and, hiding with the help of a time machine, hide it in time. The center sent an elite Runners team to retrieve the stolen gold.
In addition to the familiar PUZZLE mode, the game has a BATTLE mode, in which up to 5 players can compete, and an EDIT mode, where you can create your own levels. In BATTLE mode, you can play in different ways - according to the SURVIVAL rules, the one who will last the longest wins, and the victory in ESCAPE will go to the one who can steal items from enemies and hide. Four players can also split into two teams and compete in TAG MATCH.
‹
›
Home
View web version