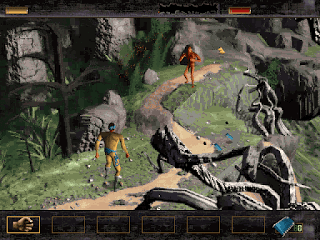 Genre: Action
Perspective: 3rd-person
Gameplay: Puzzle elements
Setting: Fantasy, Sci-fi / futuristic
Published by: Activision
Developed by: Adeline Software International
Released: 1996
Platform: DOS
Future. The military department, together with one mega-corporation, is creating a supercomputer that can recreate a virtual picture of any era in the history of mankind. Work on the project would have gone on as usual if it had not been for a spy sent by a rival corporation ... he managed to infect the central computer with a virus that created an electromagnetic dome that distorts time and space, threatening to destroy the entire earth. Stanley Opar, who works in this secret center, was the first to react to the raised alarm. Without thinking twice, Stanley decides to enter this dome and neutralize the virus, but as a result he ends up in the distant past, recreated by a supercomputer. Now Stanley has only two tasks - to survive and destroy the virus from the inside.
Time Commando is a purebred arcade third-person action game in which you have to fight most of the time against a wide variety of opponents in a wide variety of time eras. The battles themselves look very high quality, sometimes even very spectacular and exciting. But at the same time, during the battle, a moderate pace is maintained and the fights do not turn into a chaotic carnage with pressing all the keys in a row. Battles are mainly held against one or two opponents. Aside from the opponents themselves, your hidden enemy will be time, which is steadily decreasing. To beat time in this virtual world, you will need to collect blue microchips on levels and upload them to local portals, which are also the only way to save the game. The game also has secrets and hidden rooms in which you can always profit from weapons, health, or even a whole spare life.
The controls (as well as the interface) in the game are very convenient. When using fists or some melee weapon, we can inflict three types of blows on the enemy (lunge, left blow and right blow) or try to block his attack (blocking does not work in all cases: for example, blocking a sword blow with our hands will be very problematic and even traumatic). It is even easier to handle throwing and firearms: you just need to turn towards the enemy, and when a sight appears on him, you can open fire.
The game is graphically implemented in a very interesting way. The main character, objects and all opponents are made in the most real 3D. But the whole world around is a rendered three-dimensional video, followed by the main character. As a result, the overall graphic design of the game looks unusual, but at the same time it is quite beautiful. It is also worth mentioning that we cannot return to the already passed locations on the level.
Sound and musical design is made with a plus. Almost everything in the game is equipped with sounds, and the music (mainly in MIDI format) for the game was written by the great Philippe Vachey, the author of soundtracks for such masterpieces as Alone in the Dark and the Little Big Adventure dilogy.
The game has several difficulty levels. From the easiest, which is ideal for beginners, to the most difficult, in which even an experienced player will face very difficult situations in the game. The more difficult the chosen difficulty level, the more enemies appear on the levels, their health becomes higher, and the time to complete the level is less.
Summary. The second masterpiece from Adeline Software. An original, interesting, varied, well-made and easy-to-control action game in which you can fight with your fists, fight with swords and shoot with pistols. Recommend. 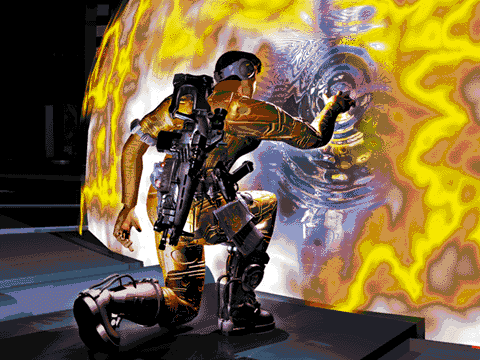