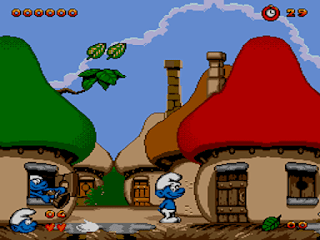 Genre: Action
Perspective: Side view
Visual: 2D scrolling
Gameplay: Platform
Published by: Infogrames Europe SA
Developed by: Infogrames Europe SA
Released: 1995
Platforms: SEGA CD / Mega-CD, SEGA Genesis / Mega Drive, Super Nintendo (SNES)
The Smurfs game tells us about the adventures of the Smurfs, which were invented by the Belgian comics writer and artist Pierre "Peyo" Culliford. You go to their world, where you will help one of the blue gnomes free his friends from the clutches of the evil sorcerer Gargamel, who kidnapped them for his cruel experiments. He also kidnapped the only girl in the village of Smurfs - Smurfette.
In addition to the standard platforming levels, the game will also have pseudo 3D levels.
The game has excellent animation and a very beautiful cartoon picture, not inferior to many Disney games for 16-bit consoles. The game is fun and shouldn't get boring. Unlike its Sega Genesis / Mega Drive version of The Smurfs, the Sega Mega CD version has an animated intro.
In each country, The Smurfs game had its own name:
‹
›
Home
View web version