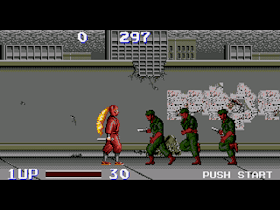 Genre: Action
Perspective: Side view
Visual: 2D scrolling
Gameplay: Beat 'em up / brawler
Interface: Direct control
Published by: Taito Corporation
Developed by: Taito Corporation
Released: 1993
Platforms: SEGA CD / Mega-CD, Super Nintendo (SNES)
The game's plot was set in the future in 1993. The President of the United States Banglar becomes a dictator and introduces martial law in the country. Now the military is in charge. And anyone could be punished without trial or investigation. The group of scientists did not like this and in order to stop this, they decided to create two android robots like the Terminator. Ninja and Kunoichi. You have to play for one of them. You can throw shuriken's, as well as use various combos (special movements). The game can also be played together.
‹
›
Home
View web version