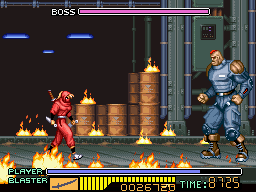 Genre: Action
Perspective: Side view
Gameplay: Beat 'em up / Brawler
Setting: Sci-Fi / Futuristic
Published by: Taito Corporation
Developed by: Natsume Co.
Released: 1994
Platforms: Super Nintendo (SNES), SEGA CD / Mega-CD
Creators in the past such cult games on Nes as Legend of Kage, Power Blade, Shadow of the Ninja, etc. This union revived one of the best hits on the arcade in 1987 - Ninja Warriors from Taito. On the home console Super Nintendo they have just a delightful remake. One of the best Beat-Em-Ups on this console, if not the best. Excellent graphics, with many destructible objects, a chic musical accompaniment from Hiroyuki Iwatsuki, perfectly conveying the atmosphere of the game and unique characters: Ninja, Kunoichi, Kamaitachi made the game a real masterpiece. Three android should stop the brutal war, senseless deaths and excesses of the tyrant Banglar. All characters with the maximum distinctive characteristics: the power of Ninja, the stability of Kunoichi, the automatism of Kamaitachi, the qualities that flow into numerous receptions and combinations, will help them crush a merciless army. Horror and destruction were reflected in numerous streets, and cities were flooded with highly developed machines for brutal massacres. This era will have to end, as our heroes, whose lives have just begun, will end their existence. In the Japanese and English versions there are differences, so it is recommended to use the Japanese rum Ninja Warriors Again.
We are given the opportunity to play for three different in the characteristics of androids. Not every day you will meet Beat 'em up, where the characters were so different and unique in the performance of various combinations of strokes and movements: the power of Ninja, the stability of Kunoichi and the automatism of Kamaitachi. It will not be difficult to learn different attacks, but it's possible that you can miss something, just in case, see the FAQ on this game, published on this site. The graphics in the game are implemented to the maximum: unique backgrounds, various enemies and bosses, various destructible objects, etc., it's even hard to believe that the game was implemented on 16-bit, most likely the game is worthy of the graphic capabilities of Neo-Geo, Than Snes. A unique feature of the game can be called the musical accompaniment, which was written by the composer Hiroyuki Iwatsuki. Also touches for the lively and the ending of the game, but you'll see it for yourself, because it's not fair to tell everything yourself. I could describe my impressions about the game for a long time. I consider it the best action movie on Super Nintendo, one of the symbols of this console on a par with Super Metroid and the best classics of video games.
In another way, this game was called Ninja Warriors: The New Generation.