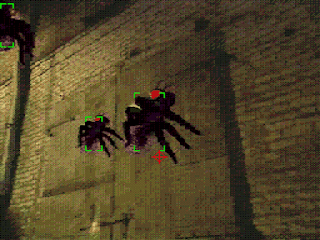 Genre: Action
Gameplay: Shooter
Art: Full Motion Video (FMV), Video backdrop
Published by: Good Deal Games
Developed by: Stargate
Released: 2003
Platform: SEGA CD / Mega-CD
Bug Blasters: The Exterminators is a humorous game made with an interactive FMV video. You are going to be an insect hunter in the elite Bug Blasters division. The whole point is that you have to fight huge mutated insects. And these insects - various flies, midges, cockroaches and incomprehensible creatures, call themselves the "League of Insects", under the leadership of a large caterpillar in a captain's uniform, a certain El Roacho, seize the city hall in Los Angeles. You must stop them. It will not be easy to do this, since you are fighting against them using weapons, and they are shit against you. And it will be everywhere. Quite a funny game. The game was supposed to appear back in 1995. But this did not happen. Fortunately for fans of the Sega Mega CD, Good Deal Games released the game in 2000, and then back in 2003 a Special Edition version.
‹
›
Home
View web version