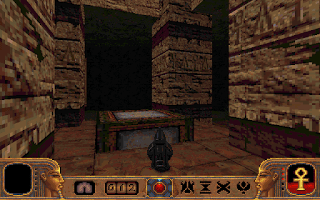 Genre: Action, FPS
Perspective: 1st-person
Gameplay: Shooter
Interface: Direct control
Setting: Africa
Published by: Playmates Interactive Entertainment
Developed by: Lobotomy Software
Released: 1996
Platforms: DOS, PlayStation (PSX, PS1)
Powerslave is an arcade shooter set in an Egyptian setting. From the arcades, the game took over the impossibility of signing up at the level and the presence of a certain number of lives, as well as the designers' love for traps and various platform jumping. However, in general, it turned out very well.
Unlike the old days of Duke, the architecture of the levels is not so well thought out (although there are exceptions), but it pleases the eye with its colorfulness and interesting design moves, again associated with traps and jumping ropes.
Plus - many, many wild "monkeys" in the form of ordinary monsters and very colorful Bosses.
As a minus and plus, we can attribute the fact that the game is quite long and difficult, there is always not enough cartridges to shoot from the monsters, and the aforementioned traps, jumping ropes and generally wandering around the intricate architecture of the level can sometimes just get mad.
And also under water, as in life, all firearms do not work, and very toothy fish swim in the water, against which you can only brush it off with a machete knife, and sometimes there are a lot of fish..
Only one thing can be said about the plot: the presence of malicious aliens and the general mysticality of what is happening will be provided in the best possible way, as well as explanations of why the hell are you doing here alone (guess at one try? Right! You are saving the world).
‹
›
Home
View web version