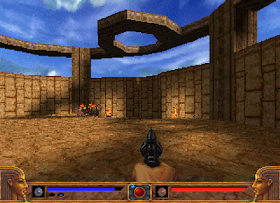 Genre: Action, FPS
Perspective: 1st-person
Gameplay: Metroidvania, Shooter
Setting: Africa, Sci-Fi / Futuristic
Published by: Playmates Interactive Entertainment
Developed by: Lobotomy Software
Released: 1997
Platforms: PlayStation (PSX, PS1), DOS
This game is a replenishment of the collection of corridor insurgents for the PlayStation system, and the replenishment is very good. When this game first appeared on Saturn, it did not attract much attention at first; well, another double Doom. Nevertheless, the game makes a very good impression and is one of the best games for the PlayStation in this genre. Space aliens many years ago attacked the Earth and stole the mummy of the once powerful Pharaoh Ramses. But this seemed to them little, and they scattered six magical items of great power in the Karnak valley. And now you have to figure out this case, find the objects and track down these mishapak creatures. Well, Ramses, so let him rest in peace.
Throughout the game, you will have to acquire new weapons (your collection is simply gorgeous) and special abilities in the fight against supernatural forces. Unlike the famous game Doom, here you can and should return to the levels already passed to once again to explore them. Well, of course, desperate shooting on monsters, which in the game is enough.
The graphics here are distinctive, with slightly muted light effects and a "fish eye" when approaching objects. Sound accompaniment and music are chosen very professionally. In the control system, everything is fine, except, perhaps, performing jumps; you can never be sure that you will land safely.
Your main goal in the game is to find and collect six magical items in the Karnak Valley. And each gives you a new ability and power!
Plus, you can get your main weapon as a reward when you collect enough The Team Dolls, (about Team Dolls read below) two magic Mode's. Dolphin Mode - gives you the opportunity to rush in water and under water at great speed, to make puzzling jumps, while Eagle Mode - will allow you to "find wings" and fly anywhere! With such opportunities, the search for the remaining The Team Dolls will become even more exciting.
The action takes place in the valley of Karnak Valley, and most of the 22 levels have more than one outlet! Some exits can only be detected with the help of magic items, if you can find them during the game. The spirit of Pharaoh Ramses will help you, and as you find magical objects, the plot of the game will evolve more and more interesting.
When you finally find all six magic items, you might think that the game is over. After all, you have passed all levels and defeated the main enemy! But there it was, and you still have to work hard to get the title Exhumed Master! So, for example, you will need to assemble all parts of the radio transmitter that are scattered across the Karnak valley. If you succeed, then ... see for yourself what will happen.
Well, like, and the game ended. Found all the magic items, assembled radio transmitter - what else? On all levels are hidden little mummies (The Team Dolls) with the faces of programmers who developed the game Powerslave (Exhumed)! They are hidden in the most inaccessible places and on each level (in the version for Saturn there were only a few). If you cope with this, you will receive three bonus games, and even more!
I think that you have a great entertainment. The graphics look fresh and original, the sound is excellent, the controls are also at altitude, and the design levels deserve every respect for the imagination of the developers. An excellent game!

In addition to weapons, you can use various ancient objects (Aptifacts), which have magic power. If, of course, you can find them, but you will have to find them, they are the main goal in the game, to find and collect six magical "items" in the Karnak valley is absolutely necessary. And each will give you a new power! Here they are:

The collection of weapons in the game is simply gorgeous, but you will start the game with an ordinary Machete. Of course, very soon you will find a variety of modern weapons, as well as powerful magical Egyptian "gadgets":
Plus, you can get this weapon as a reward (when you collect a fair amount of The Team Dolls, these are dolls of the game developers team), two magic Mode's, with such opportunities the search for the remaining The Team Dolls will become even more fascinating:
If you managed to finish successfully the game, do not rush to switch to the Soul Blade or Tomb Rider. Still have time. And better try to deal with another secret of this wonderful game. You will find pupae depicting the members of the team who developed Exhumed. They are scattered at different levels, more precisely, one pupa at a level. Find 10 pieces, and get a special gift. Try to find the pupae yourself, but if you can not find which ones, then use our tips. But where? Here it is necessary to find them: