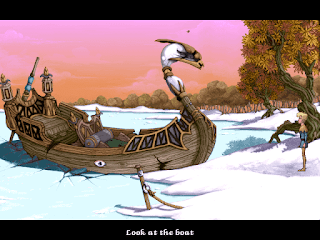 Genre: Adventure
Perspective: 3rd-person
Gameplay: Graphic adventure, Puzzle elements
Interface: Point and select
Setting: Fantasy
Published by: Sir-tech Software
Developed by: Simbiosis Interactive
Released: 1996
Platform: DOS
The quest is designed in the best traditions of its genre (now, alas, forgotten ones) - hand-drawn (by the way, very high-quality animation), with a side view, with numerous dialogues and solving riddles as the basis of the gameplay.
The plot is based on the story of a world split into four parts by an ancient magical war. The winners, four dark sorcerers, each received a quarter of the territory. The entire population of the world died, with the exception of the small village of Balkhane, which ended up on the Ice continent (three other continents - respectively, Water, Mist and, oddly enough, Fire). With the help of magic stones, sorcerers rule this world solely for their own purposes.
And then one day the inhabitants of Balkhane decided that it was time to put an end to this outrage. From several candidates for heroes, they chose a young man named Quickthorpe and sent him on a mission - to bypass all four lands, defeat the magicians and pick up their stones: an emerald in the Frozen Land, a sapphire in the Water Land, a diamond in the Misty Land and a ruby in the Fiery Land.
The task, frankly, is not an easy one, especially when you consider that the inhabitants of the Frozen Land are at best only guessing about the existence of those other lands. Quickthorpe's role in these adventures is up to you.
Putting on a funny costume, leaving his girlfriend in the village and saying goodbye to the elder, your hero sets off on a long journey ...
‹
›
Home
View web version