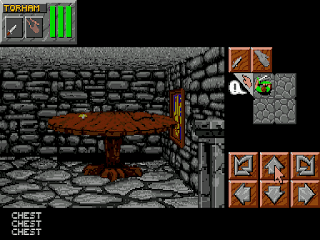 Genre: Role-Playing (RPG)
Perspective: 1st-person
Pacing: Real-time
Gameplay: Puzzle elements
Setting: Fantasy
Published by: JVC Musical Industries
Developed by: FTL Games
Released: 1994
Platform: SEGA CD / Mega-CD
Echoes of the past make themselves felt - evil forces begin to creep out from another dimension. As a hardened hero, you must find the lost legendary artifact Zo Link, which is located in the dungeon of Zo Keep.
The game is an RPG with real-time battles. That is, on duty, you should not think about what to hit the enemy - you need to either keep everything close at hand, or chaotically beat anything :) During the game, up to four people can join you at the same time. The graphics are good, but the special effects in the form of rain or magic are especially impressive.
‹
›
Home
View web version