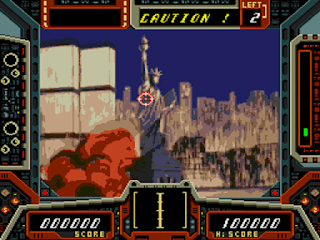 Genre: Action, Simulation
Perspective: 1st-person
Art: Video backdrop
Gameplay: Rail shooter
Vehicular: Flight / aviation, Helicopter
Published by: Renovation Products
Developed by: Data East Corporation
Released: 1992
Platform: SEGA CD / Mega-CD
You are the pilot of an air machine called the LX-3 Super Cobra helicopter, who has to clear the streets of New York (as well as the waters over the Atlantic, Italy and other interesting places) from enemy helicopters (and how did the terrorists manage to find so many helicopters?). But we will only be allowed to aim at the enemies and at a certain moment press the arrows in order to escape the obstacle.
I won't say that the game is so bad, but its style will not be to the liking of the majority. Also, the disadvantages of this game will be: lack of background music, poor sound quality, short levels - the game takes a maximum of 20 minutes.
‹
›
Home
View web version