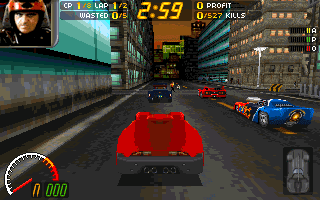 Genre: Action, Racing / driving
Perspective: 1st-person, Behind view
Vehicular: Automobile, Vehicular combat
Published by: Interplay Entertainment Corp., SCi Games Ltd.
Developed by: Stainless Software Ltd.
Released: 1997
Platforms: DOS, PlayStation (PSX, PS1)
A game that, with its level of brutality, set new standards not only for the racing genre, but for the computer industry as a whole.
The basic concept of the game is not much different from many other representatives of the arcade racing genre. You take part in races, earn money from it and improve your car with them. Six cars participate in each race. You have a countdown timer. Unlike most racing games, in which the timer is replenished upon reaching a certain point on the track, the so-called checkpoint, in Carmageddon it requires crashing into other cars and crushing passers-by to replenish it. The more brutally you do it, the more time and money will be added to you. Liters of blood and pure crazy fun. This is a race for survival, in the truest sense of the word.
There are three ways to win a race. You can, having cut the required number of circles, come first to the finish line, destroy all your rivals, or pass every single pedestrian. To help you in the difficult goal to get out of the race not only alive, but in addition to the winner, trampolines are placed along the track. They can be used both for their intended purpose and for performing various tricks, for which you will be credited with additional credits. It is considered aerobatics, jumping from a springboard, to land in a crowd of passers-by, filling the entire area with blood.
The bonuses scattered around the track add fuel to the fire. They can be both extremely useful (for example, free car repair), and practically useless (all passers-by are doubled).
Despite the fact that Carmageddon is marketed as an arcade racing game, the physics model of the game is amazingly detailed. You won't find two cars that drive the same way. And this is not to mention their appearance, which clearly testifies to the sheer madness of the developers. The damage model is not forgotten, thanks to which you will most likely come to the finish line in something glowing and only vaguely reminiscent of the car in which you started this race.
But no matter how good the car design is, the game world easily overshadows it with its splendor. The game features more than thirty tracks, although many of them are different routes, laid along the same location. You are free to drive off the road and chase pedestrians, or look for especially valuable bonuses, cleverly hidden off the main track.
If you love the feeling of speed and have nothing against the blood in computer games, then Carmageddon is the game for you. Dozens of hours of absolutely insane fun are guaranteed.
‹
›
Home
View web version