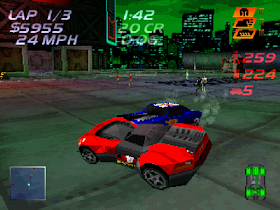 Genre: Action, Racing / Driving, Open world driving
Perspective: 1st-person, Behind view
Gameplay: Vehicular Combat Simulator
Vehicular: Automobile
Published by: SCi Games Ltd.
Developed by: SCi Games Ltd.
Released: 1999
Platform: PlayStation (PSX, PS1), DOS
Carmageddon is a rather cruel auto-racing game, banned in a number of foreign countries. Of course, no one will forbid you to peacefully finish the race by driving the right number of laps. However, there is a cheerful option - to test the strength of rival cars. Well, if you are so bloodthirsty that you are ready to ride every pedestrian, while the poor fellow is not under the wheels, you can try to pass them all on the map. The choice is yours.
The publication of a number of pictures from the game by SCi in English newspapers caused a tidal wave of negative publications and denials in the press that no one had previously said anything bad about it. But before this reporters of the yellow tabloid press were given all conceivable moral sentences and given a lot of calls against this game - "To forbid Carmageddon to be sold everywhere elsewhere!" But none of these statements and persecution reached its goal, and Carmageddon was published for the PC, and then continued in November 1998. Now it's time for us to enjoy the controversial game Carmageddon for PlayStation, a special version created exclusively for the console.
The developer of both games Carmageddon for PC, Stainless Software, has not released a version for consoles. Instead, the publisher - SCi - with the help of its own development team is working on this project, so we went to their original and unusual house located in the middle of the forest to see how the work is progressing.

The atmosphere of an isolated country, reigning there, seems to be nowhere conducive to the development of various bloody games. Free running horses, squirrels poke through the leaves, and one remarkable pig, who suffers from smoking, barely moving to the back door, champs with ejected cigarette butts. A large home country is what has become the site for the office of the internal SCi developer team that is isolated and secluded so that it only borders with the classified anti-terrorist and visiting units ("like SAS, but without such a good press," according to Sam Forest ) training areas, nevertheless, in the space between the walls of the house the work continues.
During our visit, every major element of Carmageddon PlayStation has already been well developed. Internal 3-D levels rotated and moved on the screen; The realism of the physical model has been tested on various rotating framed forms; suitable industrial-looking main and other menus, as well as the screen of the settings panel, were completed.
However, at this time, all these elements are still separated from each other. You can swivel on the level-packed levels (novelty for PlayStation) on the development site to see, but all the activity that you will see is pedestrians, bored (like "jackets" in the office) and randomly circling around. You can drive cars, switch J-toggle switch and ram other vehicles, but in the planes of the full-length Tron-like world everything is made of lines and unfilled, unmarked polygons.

People responsible for combining all these parts together into one murderous game is the manager of the studio John Court. He believes that you will get a new pleasure from playing Carmageddon on PlayStation, even if you used to play it on PC or in the appeared Nintendo64 version. What is different in the PlayStation incarnation? All levels are made unique, and some of the cars were also made anew. Triple machine superiority in various areas and, obviously, we will continue to develop the best PlayStation spaces. Transparent effects, particles and all that. Our levels also contain many different light effects.
The creators also included special level missions in the game. To attract more fans of Carmageddon the game still has a free passage with roughly the same choice of ways to achieve the goal. But from time to time you have to finish the level differently than you usually do, say, for example, to crush all pedestrians at a level within two minutes. This does not destroy the integrity of the game, but only adds small differences to the level passing.
Carmageddon should and will be played like the great Die Hard Trilogy (racing missions), only with much more realistic physics. When you chase the track, breaking into pieces small set of hard stone nuts, which were previously represented by your opponents, carefree people walk on their own business and are immediately horribly smeared by cars. The real basis of the graphics is partly the polygons in place of the inanimate and flat sprites of the PC version; "Jackets" could break strong fortifications in the creation of more violent forms, with detached limbs and all such like. Be that as it may, gore blood causes a lot of protests, and when Carmageddon is released, it may be banned for sale in some countries. There is an assessment of the situation, country by country. Basically, SONY asked us to properly observe the laws of the territory of sales. Like playing on a PC, different versions of Carmageddon for PlayStation are possible.