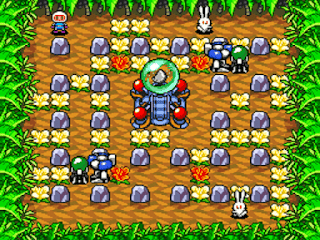 Genre: Action
Perspective: Top-down
Visual: Fixed / flip-screen
Gameplay: Arcade
Interface: Direct control
Setting: Sci-fi / futuristic
Published by: Hudson Soft Company
Developed by: Hudson Soft Company
Released: 1993
Platforms: TurboGrafx-16 (TG-16), SEGA Genesis / Mega Drive
Bomberman has become super-awesome! A new plot, about how a meteorite broke tiles and powerful monsters ran out of there. Unfortunately, parts of the tiles are scattered into enemy sectors, and it will not be easy to get them. Isn't this the trick of the dark brother?
In addition to the fact that Bomberman himself lost weight from the second part, the stage now ends on its own - now you do not need to look for a way out. Also, some animals like kangaroos appeared, on which you can jump and ride (they have special features, such as jumping).
‹
›
Home
View web version