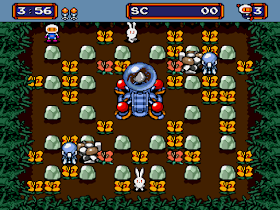 Genre: Action
Perspective: Top-down
Visual: Fixed / flip-screen
Gameplay: Arcade
Interface: Direct control
Setting: Sci-fi / futuristic
Published by: SEGA of America
Developed by: Hudson Soft Company
Released: 1994
Platforms: SEGA Genesis / Mega Drive, TurboGrafx / PC Engine
The great and terrible Bomberman came out on almost all common gaming platforms and Sega is no exception. Let's omit the ideological aspects of the game. Before us is a wonderful arcade game and all you need is to blast your way to the exit with explosions, without exploding yourself. The game is designed for four (!!!) players, so it will give you a real pleasure to deal with your opponents. In addition to the players, various parasites run around the playing field, which can be blown up with pleasure. Sometimes after an explosion you get prizes. If anyone has played Pengo, he will understand the full thrill of this game!
‹
›
Home
View web version