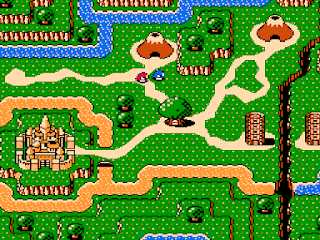 Genre: Action, Puzzle
Perspective: Bird's-eye view
Visual: Fixed / flip-screen
Interface: Direct control
Published by: HAL America Inc.
Developed by: HAL Laboratory
Released: 1990
Platform: Nintendo (NES)
The plot of the game is as follows. One day Lolo and Lala were sitting on the banks of the river and suddenly noticed something happen in their kingdom. When they returned, they saw a strange picture - all their friends turned into stones! On the horizon, only the silhouette of the Evil Demon flickered. So, it's time for the main characters to go on a journey again!
The developers have tried their best, the game has a lot of innovations. Now the player has the opportunity to choose a character, the levels following each other have been replaced with a colorful map, and a well-thought-out level design makes the passage much more interesting. A small tutorial level has also been added ("Hint", located in the tree). In the graphics, as well as in the sound design, there are no differences from the previous parts, only the side status bar has been slightly changed.
‹
›
Home
View web version