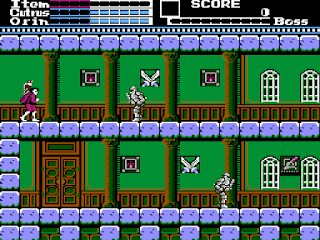 Genre: Action
Perspective: Side view
Visual: 2D scrolling
Gameplay: Platform
Published by: Taxan USA Corp.
Developed by: Thinking Rabbit
Released: 1990
Platform: Nintendo (NES)
"8 Eyes" is an exciting game about a brave hero named Orin, who, together with his faithful friend, the falcon Kurtus, must complete an important mission. And the mission is this: visit residences in eight different parts of the world and collect gems called "Eyes". But after passing each large level, no one will give us these stones just like that - in order to achieve this goal, we will have to defeat eight large "bosses".
The gameplay consists in walking through the rooms, in which various enemies climb on us without stopping, and there is no end to them. In these rooms, there are often different levers that need to be activated with a blow of the sword or skillfully dived on them with a falcon.
An interesting nuance - in the two-player mode, the second player takes control of the falcon, so it becomes more interesting to play, and the passage becomes not so difficult. Defeated enemies sometimes drop auxiliary items, for example, throwing swords or balls that immobilize enemies.
Graphically, the game is not very impressive, especially when compared to the "Contra" released around the same time, but it is still able to hook thanks to its varied gameplay.
‹
›
Home
View web version