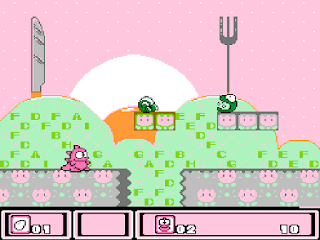 Genre: Action
Perspective: Platform
Setting: Fantasy
Published by: Asmik Corporation
Developed by: Graphic Research Co.
Released: 1991
Platform: Nintendo (NES)
In the world of dragons, monsters from other parts of the universe began to create riots. The only thing that can save the dragon world from complete destruction is the six Dragon Gods. Unfortunately, they are in hibernation, and the cute-looking pink dragon Asmik decided to save his world. He needs to find and awaken the Gods before it's too late.
So, "Asmik" is a very high quality platformer in many ways. The gameplay is easy to learn: moving from left to right, our dragon jumps on platforms, dodges enemies and turns them into eggs. It is rather difficult (even embarrassing) to describe the process of turning an enemy into an egg, because it painfully resembles the most common way to remove excess gases from the intestines. Let's leave it on the conscience of the developer. Eggs are needed to buy bonuses (which
‹
›
Home
View web version