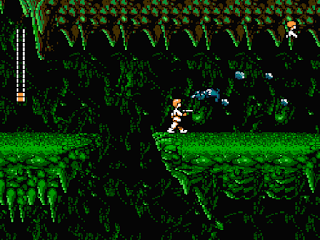 Genre: Action
Perspective: 1st-person, Side view, Top-down
Vehicular: Space flight
Setting: Sci-fi / futuristic
Published by: JVC Musical Industries
Developed by: Beam Software Pty.
Released: 1991
Platforms: Nintendo (NES), SEGA Master System, SEGA Game Gear, Super Nintendo (SNES)
The game is based on the George Lucas movie Star Wars Episode IV: A New Hope.
So, now is the period of the civil war. Rebel spaceships won the first attack against the forces of the evil Galactic Empire. During this battle, the spies managed to steal the secret plans of the Empire for some kind of super-powerful weapon Death Star - an armored space station powerful enough to destroy the planet. Pursued by sinister agents of the Empire, Princess Leia flies home in her starship. She keeps secret Death Star plans!
You start on the planet Tatooine, where Luke Skywalker must meet his friends - R2-D2, C-3PO, Obi-Wan Kenobi and others. Then you are already traveling to other places (Death Star, etc.). Most of the levels are presented by a regular platformer, where you control either Luke or Qui-Gon, or Leia. However, there are levels where you need to fly from above in a spaceship, and there are even other levels - with a view from the cockpit of your ship.
‹
›
Home
View web version