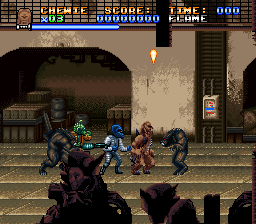 Genre: Action
Perspective: 1st-person, Behind view, Side view
Visual: 2D scrolling
Gameplay: Arcade, Platform
Setting: Sci-Fi / Futuristic
Vehicular: Space Flight
Published by: JVC Musical Industries
Developed by: Sculptured Software, LucasArts Entertainment Company LLC
Released: 1992
Platforms: Super Nintendo (SNES), Nintendo (NES), SEGA Master System, SEGA Game Gear
Based on the movie Star Wars: Episode IV - A New Hope, which was released in 1992, and later reissued for Virtual Console in 2009. Super Star Wars in general is a 2D platformer, although the game also has levels that do not fall under this genre - for example, driving a land-dropper and flying on the X-wing. In the game there are also various playable characters with different abilities.

Super Star Wars is a remake of the much less famous Star Wars game, which was released in 1991 for the Nintendo Entertainment System, Sega Master System, Game Boy and Game Gear.
Initially, it was assumed that in the game the characters will have a black stroke similar to Ultima VIII: Pagan. However, this idea was abandoned, because it was decided that then the characters will look too cartoonish.
The game has three main characters. Luke Skywalker has a small amount of health, but after meeting with Obi-Wan, he has a new weapon - a lightsaber. Late levels allow the player to control the smuggler and pilot Han Solo (has an interrupted subcategory and average health reserve) or Chewbacca, Wookiee (has the maximum health reserve).
The final boss in the game is Darth Vader on TIE Advanced.
The game had a level with a garbage compactor that was removed due to memory limitations. The image was published in the Electronic Gaming Monthly around the time the game was released.

The plot of the game Super Star Wars as a whole repeats the plot of the movie Star Wars. Episode IV: A new hope, although some liberties were allowed in order to adapt the story to a platform game. For example, instead of just buying the C-3PO and R2-D2 from Jav, Luke Skywalker must make his way to the top of the crawler Jaw, jumping over a series of moving conveyors.
Also in the game and its sequels changed the fate of Boba Fett. If on the plot of his films in the sixth episode is eaten by the sand monster Sarlakk, here Luke destroys Sarlakka at the first level of the fourth episode, and Fett himself in the fifth episode kills Chewbacca.
‹
›
Home
View web version