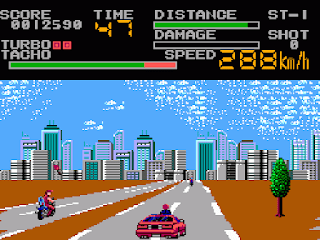 Genre: Action, Racing / driving
Perspective: Behind view
Gameplay: Shooter
Vehicular: Automobile
Narrative: Crime
Published by: Taito Corporation
Developed by: Taito Corporation
Released: 1992
Platform: SEGA Master System (MS)
Three girls have been reported as kidnapped by a gang of thugs, including the mayor's daughter. To solve the problem we modified a car with a custom gearbox with two speeds, high and slow. On the gear knob there is the turbo button, operating it for five seconds the car travels at high power driven by Nitro fuel. Can be used five times on a mission. You are equipped with a pistol, the trigger is positioned on the steering wheel. You have a few seconds (60) to do the job. Commissioner K. Hansen.

The game takes place over six levels, in a sports car (a Nissan 300ZX Z32) you have to reach the suspect and arrest him within a time limit. Five nitro charges are available to increase speed considerably. Once you have reached the criminal's vehicle, you have to arrest him by ramming him or shooting him with a gun; it is also possible to use a bazooka, limited to only 4 shots.

The enemies that we will chase during the game are:
‹
›
Home
View web version