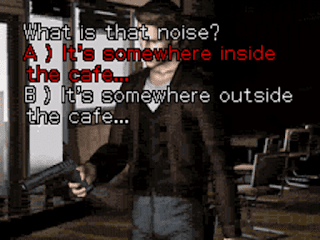 Genre: Adventure
Gameplay: Visual novel
Narrative: Horror
Published by: Konami Corporation
Developed by: KCE Tokyo, Will Co.
Released: 2001
Platforms: Game Boy Advance (GBA), SEGA Genesis / Mega Drive
The game's plot largely repeats the events of the original Silent Hill. The main character is Harry Mason, who is looking for his missing adopted daughter Cheryl in the city of Silent Hill. After the first playthrough of the game, a scenario for Cybil Bennett becomes available, and after its completion - a downloadable scenario "Boy", consisting of four parts: "Spring", "Summer", "Autumn" and "Winter". This script told about Andy, a seven-year-old boy who lives in a house next to the Mason family and gets into the city of Silent Hill, having entered the car of Harry and Cheryl.

There are three playable characters in Silent Hill: Play Novel: Harry Mason, Cybil Bennett and the boy Andy, who appears only in this game in the series. Initially, you can only play as Harry, after completing his scenario, the game becomes available for Cybil. Andy could be played by downloading the "Boy" script from the Konami server through a special Mobile Adapter GB device that combines the Game Boy Advance with certain cell phone models and allows them to access the Internet. The server is currently unavailable and the script cannot be obtained.
The game is a visual novel in the style of the Choose Your Own Adventure books - at certain moments the player has to choose from two or three options what the game character has to do next. Depending on the choice, the plot of the game changes, and, thus, the player can get one of several endings: in the scenario of Harry Mason there are eight different endings, in the scenario of Cybil Bennett - six. Sometimes the player will need to solve a puzzle in order to advance further in the story. At the end of any scenario, the player is given a number of Digital Trading Cards. The received cards depend on the ending received and the visited locations in the game. There are 32 cards in total, of which 16 can be obtained in Harry's scenario, 12 in Cybil's scenario and 4 in Andy's scenario. It is impossible to die in the game.
‹
›
Home
View web version