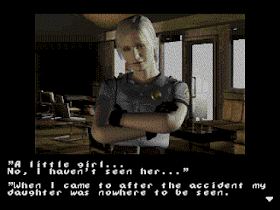 Genre: Adventure
Gameplay: Visual Novel
Narrative: Horror
Published by: lupus
Developed by: lupus
Released: 2013
Platforms: SEGA Genesis / Mega Drive, Game Boy Advance (GBA)
In the game, both the storylines of Harry and Sybil are realized, and the script for Sybil becomes available only after walkthrough the script for Harry. Implemented a large number of different puzzles, do it on GINCS is not so easy. Several endings for each of the characters, implemented a system of saving with passwords, as well as bonus content. There are two versions of the game, in English and Russian, so that those with English can not easily get acquainted with this wonderful game.
Now a little about the implementation of the game. The game made lupus known as well as lps. The game is made using the GINCS Visual Studio program, which uses the modified GINCS constructor.
‹
›
Home
View web version