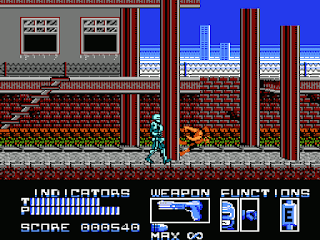 Genre: Action
Perspective: Side view
Visual: 2D scrolling
Setting: Sci-fi / futuristic
Published by: Data East USA
Developed by: Sakata SAS Co.
Released: 1989
Platforms: Nintendo (NES), Arcade Machine, Amstrad CPC
The first coming of a metal hero to the NES. The game was made by the company based on the film of the same name and is a port of the arcade machine version. It looks modest both graphically and functionally: Robocop moves slowly, cannot jump, easily encounters enemy attacks. But there is a certain charm in the game. In addition, the gameplay is interesting - Robocop is able to block enemy attacks (Select button), which is very useful in the absence of a jump. Our hero does not take out the pistol right away, so he will have to work with a strong Kevlar fist..
‹
›
Home
View web version