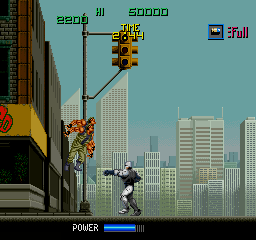 Police officer Alex Murphy brutally murdered a gang of bandits and as it turned out not in vain. Later, Murphy was put on the operating table where he was made of a cyborg named Robocop. Now Murphy wants to take revenge on who did this to him.
The gameplay in the game is similar to any shmapu, but it's very difficult to play it, so if you do not play on the emulator, it's impossible to go through it.
Pros: Familiar gameplay, simple control, beautiful graphics, memorable story, good soundtrack.
Cons: Wild Disbalance, Curves hitboxes, a very short game, an incredibly high level of complexity.
Verdict: So to herself - the game though looks good, but it's damn curved and it's impossible to play it.
‹
›
Home
View web version