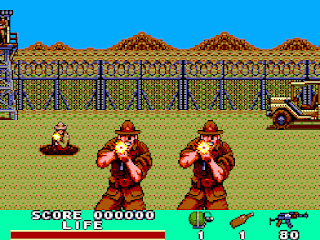 Genre: Action
Perspective: 1st-person
Visual: 2D scrolling
Gameplay: Shooter
Published by: Colonel Trotman
Developed by: SEGA Enterprises Ltd.
Released: 1988
Platforms: SEGA Master System, SEGA Genesis / Mega Drive
He is back! Invincible Rambo! Now Colonel Trautman has been captured by Soviet forces in Afghanistan. The government is ready to leave the poor man there, as they fear that the rescue operation may cause international conflict. However, you have a different opinion. Trotman is your friend, and therefore you took up arms (by the way AK-47, hand grenades) and moved forward ... More precisely to the side, tk. This is a first person shooter game. I didn't really like this part, the second is better. Too difficult!
‹
›
Home
View web version