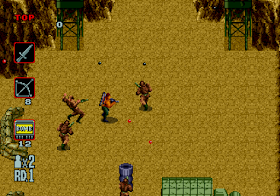 Genre: Action
Perspective: Behind view, Top-down
Gameplay: Shooter
Published by: SEGA of America
Developed by: SEGA Enterprises Ltd.
Released: 1989
Platforms: SEGA Genesis / Mega Drive, SEGA Master System
The game features two types of graphic design: graphics with isometric view, vertical scrolling mode and top-down (in the main level) and 3D graphics (during the battles with the bosses).
In the story, John Rambo has to rescue his commander Colonel Trautman from the captivity in which he hit during the fighting in Afghanistan, and then together go beyond the borders of the state.
Gameplay is as follows. Character moves on six levels, locations, destroy enemies using various weapons (machine gun, a knife, a bow with explosive shells and time bombs) and performs the task (to clean up the territory to rescue the hostages, blow up boxes of ammunition, etc..). Ammunition for weapons can be replenished during the level, collecting various items (icons depicted on them the letters A, B, and so on. D.). After each level is a battle with the boss - a helicopter or a tank; thus the character can use only one type of weapon (bow), adjusting its capacity.
The enemies in the game - the soldiers and guns. Soldiers armed with machine guns and can move around in cars (trucks and jeeps, and later - tanks), as well as to attack the hero from the watchtowers. Guns are fixed structures, with some reserve strength and attacking single shells. Most often, they are placed in the aisles between the walls, blocking the way; to go further in the level, you must destroy it. On later levels there are tanks; as well as guns, tanks, attack missiles, but much more powerful.