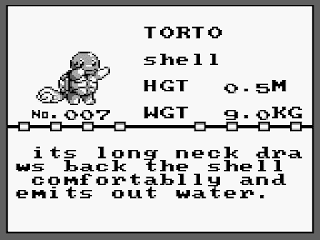 Genre: Role-Playing (RPG)
Perspective: Bird's-eye view
Pacing: Turn-based
Gameplay: Japanese-style RPG (JRPG)
Setting: Fantasy
Published by: Nintendo Co.
Developed by: Creatures, Game Freak
Released: 1996
Platform: Game Boy (GB)
The gameplay takes place on three game screens: the game world through which the player travels, a menu where the player organizes his inventory, his team of Pokemon and sets up the gameplay, and a screen where turn-based battles take place.
The player uses their Pokemon to fight other Pokemon. When a player is attacked by a wild Pokemon or challenged by another trainer, the combat screen appears. During the battle, the player can order his Pokemon to use this or that ability in battle, use an object on the Pokemon, change the fighting Pokemon to another, or run away from the battle (you cannot run away if the player is fighting with the trainer). Pokemon have health points, when a Pokemon runs out of them, then he cannot fight until the player heals him. By defeating another Pokemon in battle, the player's Pokemon can gain experience points. Upon reaching a certain amount of experience points, the Pokemon can rise to a new level. The strength of the Pokemon depends on the level, in addition, upon reaching a certain level, the Pokemon can learn new abilities or Evolve - transform into a more perfect form.
Catching Pokemon is an important part of the gameplay. When a player is attacked by a wild Pokemon, the player can throw a Poke Ball at the player, a handheld ball-shaped device used to carry Pokemon of all sizes. If the Wild Pokemon does not break out of the Poke Ball, then it becomes the Player's Pokemon. The success of the capture depends on how strong the Wild Pokemon itself is, how many health points the Wild Pokemon has left, and the strength of the Poke Ball. The ultimate goal of the game is to complete Pokedex, an electronic encyclopedia of Pokemon. If a player catches a new type of Pokemon, then information about him goes to the Pokedex. Evolved forms of Pokemon are also considered a separate species from their previous forms, so some types of Pokemon can only be obtained through evolution. There are a total of 151 Pokemon species in Pokedex.
‹
›
Home
View web version