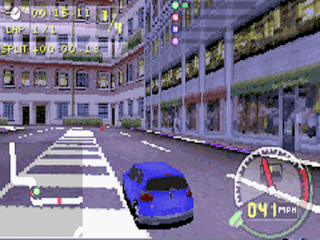 Genre: Racing / driving
Perspective: Behind view
Gameplay: Arcade
Interface: Direct control
Vehicular: Automobile, Street racing, Vehicle simulator
Published by: EA Games
Developed by: EA Canada
Released: 2006
Platform: Game Boy Advance (GBA)
The latest in the NFS racing series. This part, NFS Carbon, differs from its counterparts on the GBA first of all in that something has appeared that can be called a plot, and it is also possible to use the help of partners during the races. The rest, of course, is good, but the graphics have not undergone any visible changes again, and the music is also somehow monotonous. Cars, upgrades - nothing surprising here either. In general, another good game from the NFS series.
The game is set in the fictional city of Coast City, which with its GPS road system resembles Rockport from Need for Speed: Most Wanted. According to the storyline, one of the races ends tragically for the protagonist - he crashes into a truck and then ends up in the hospital, and his brother Mick dies. After being discharged from the hospital, the protagonist begins to look for the culprit of that accident.
‹
›
Home
View web version