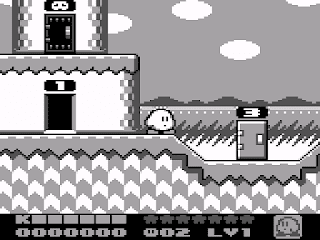 Genre: Action
Perspective: Side view
Visual: 2D scrolling
Gameplay: Arcade, Platform
Published by: Nintendo of America Inc.
Developed by: HAL Laboratory
Released: 1995
Platform: Game Boy
The plot revolves around Kirby, a resident of the Dream Land. The rainbow bridges connecting the seven Rainbow Islands were destroyed by an evil force called Dark Matter, which controls King Dedede and aims to conquer the Dream Land. Kirby decides to defeat Dark Matter in the company of three animal friends. After traveling across the seven islands, Kirby encounters the possessed King Dedede and defeats him.
If the player has collected all seven Rainbow Drops, they are transformed into a Rainbow Sword, capable of expelling Dark Matter from the body of a defeated Dedede. While exploring mystical objects, Kirby encounters Dark Matter in the final battle. He defeats her, and with the help of a sword forms a rainbow, which returns peace and tranquility to the Dream Land.

Kirby's Dream Land 2, like previous Kirby games, is a platformer. Kirby can walk, swim and fly through the levels, using the abilities of enemies to reach the goal at the end of the level. Nevertheless, now on the way of the character there are various obstacles - from pits to enemies. If Kirby touches an enemy or an obstacle, he loses a small part of his health (6 parts in total).
The main abilities of Kirby include running, jumping, flying, swimming, as well as inhaling air (the "up" button), when you press the "jump" button, Kirby will fly into the air and can reach any height (unless the obstacle allows you to reach the height ). Anytime Kirby breathes in air, he can breathe it out when landing on the ground, or the player can do it on his own. The released air can be used to damage enemies and destroy blocks.
Breathing objects, enemies, and food becomes Kirby's primary ability. To start inhaling, the player must hold down the "B" key. Kirby can inhale endlessly, and if the enemy is in the desired range, the hero will eat him. If Kirby has eaten food, then he will automatically restore health if he is damaged. When Kirby inhales an enemy or object, it remains in his mouth. At this moment, the hero can shoot them like a star (damages everything in its path). By swallowing certain enemies, Kirby gains abilities such as Ice Breath or the ability to turn to stone.
Kirby's Dream Land 2 features three allies helping him on the adventure: Rick the Hamster, which allows Kirby to ride on his back, run faster and avoid slipping on the ice. Coo the Owl, who can carry Kirby and overcome severe storms, and allows Kirby to breathe air during flight. Kine the Ocean Sunfish, which can put Kirby in his mouth and easily swim in water even against the current (but it does not work well on land), the protagonist can inhale underwater. Whenever Kirby helps an animal, his original ability changes. So, if Kirby has the ability "Spark", then while riding Rick, his ability is transformed into "Beam". At the same time, Coo allows you to attack enemies with lightning, and Kine allows you to intercept the projectiles of enemies.
‹
›
Home
View web version