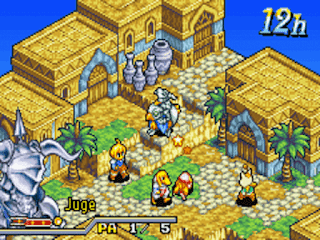 Genre: Action, Role-Playing (RPG), Strategy / tactics
Visual: Isometric
Pacing: Turn-based
Gameplay: Tactical RPG
Setting: Fantasy
Published by: Nintendo of America Inc.
Developed by: Square Enix Co.
Released: 2003
Platforms: Game Boy Advance (GBA), PlayStation (PSX, PS1)
One winter day, a strange book about a magical world called Ivalice falls into the hands of young Marche and his comrades. On the same night, our hero is miraculously transported to the very world he read about. Now Marche has to become the leader of a mercenary clan, find his friends and find a way to return home.
This game can be safely called one of the best tactical RPGs for the GBA. An interesting story, a large number of combat and magic classes, a variety of weapons and armor provided, and most importantly - about three hundred missions - will not let you get bored even for a minute! One of the interesting features of the game is the system of restrictions in battles, when it is forbidden to perform certain actions - you cannot, for example, use potions or carry out physical attacks. Recommended for both Tactical RPG fans and fans of the Final Fantasy series.
‹
›
Home
View web version