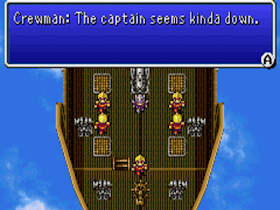 Genre: Role-Playing (RPG)
Perspective: Bird's-eye view
Visual: 2D scrolling
Pacing: Real-time, Turn-based
Gameplay: Japanese-style RPG (JRPG)
Interface: Direct control, Menu structures
Setting: Fantasy
Published by: Nintendo of America Inc.
Developed by: Square Co.
Released: 2005
Platforms: Game Boy Advance (GBA), Super Nintendo (SNES)
Whether you like it or not, we have on the agenda again the final tale of the 4 crystals of the elements. Have you seen? And what matters to us - the game came out, and we are telling. The site has a review of the original FF4, and if you want to once again step on the plot rake - you are welcome. Yes, here is the same classic story of the dark knight, and after a while the paladin Cecil. Not one iota changed. No, of course, I can believe that the developers tried, rewriting the dialogs (for the third time?), But is it really necessary if the result is practically no different from what was seen earlier. Well, the phrases of some random NPCs have become more detailed. For example, it can be seen that Kain and Rydia have become really talkative. The latter, I remember, sprinkled stories about life a couple of times. Senseless dancing with girls has not gone anywhere. In principle, almost everything is about the textual component.
In press releases before the release, the ability to pick a party for the battle with the final boss was praised to the skies. Oh well. Yes, perhaps this decision was dictated by the presence of a rather complex foe Zeromus, and it is possible that other measures are needed to combat such enemies of the people. Personally, I was quite pleased with the default composition - at least there were no extra members in it, and thanks for that. A much more significant innovation was the introduction of the Lunar Ruins - a multi-storey labyrinth where all the most valuable weapons in the game were hidden unexpectedly. It is logical that today absolutely all those who want to fill the number of hours of gameplay, and at the same time cover up the paucity of the plot, load their games with such "bonus" quests. Everything seems to be all right here with the plot (well, for 1991), but what prevented you from repeating the feint from FFI-II: Dawn of Souls, where there were a number of new dungeons on the map, which quite naturally fit into the landscape? Actually, in the latter there were much more bonus supplements. And there were two games.
And the graphics were also better. Here it is not much different from the SNES original (which, we recall, was losing graphically, for example, Phantasy Star 2. There are more colors here, the detail has increased a bit (absolutely!), And the characters in conversations have not the highest portraits. Although Cid was most fortunate with it - now our home-grown Frankenstein really has something to frighten ill-wishers. Of real improvements, we should note the backgrounds in battles, the animation of spells, and the appearance, let's say, of plot scenes of graphic inserts in the style of landscapes. neither hot nor cold.
The sound quality has thankfully deigned to improve. But the content of the soundtrack remains the same - the calm instrumental compositions will appeal to fans of Nobuo Uematsu and are unlikely to impress others. The sound effects have become a little better, and those who are thirsty to hear the speech can already go on a long erotic journey.
And further. About trends. Personally, I fully expected that FFIV would not avoid simplification, just as many remakes of old hits cannot avoid it. In this regard, the game followed the path of Shining Force: Resurrection of the Dark Dragon, that is, an indirect simplification. First, the higher default level of some heroes. Secondly, with your advantage over the enemy in terms of levels, the scale will fill up faster. The first dungeon and its surroundings, thus, pass without a single scratch, adjusted for the boss - the monsters simply do not have time to attack. Further, everything does not hurt, something changes - the enemies are quite passive. I haven't reached the moon yet, so I can't say for sure how this affected those who could really be weakened a little.
Usually, this kind of products are produced for two categories of citizens - for big fans of the notorious series and for casuals, in order to add to the beauty. Both will be pleased. But since I do not belong to any of the above categories, I can say that the value for the rest is a big question. FF V Advance and FF VI Advance appear in between in the list of announcements.
‹
›
Home
View web version