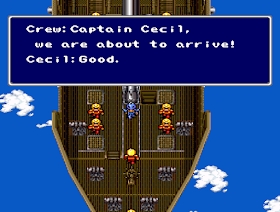 Genre: Role-Playing (RPG)
Perspective: Bird's-eye view
Visual: 2D scrolling
Pacing: Real-time, Turn-based
Gameplay: Japanese-style RPG (JRPG)
Interface: Direct control, Menu structures
Setting: Fantasy
Published by: Square Soft
Developed by: Square Co.
Released: 1991
Platforms: Super Nintendo (SNES), Game Boy Advance (GBA)
Continuation of the cult epic of role-playing games. Final Fantasy IV (Final Fantasy II in the USA) is recognized as one of the best classics of all time. The storyline plays an important role in the entire series and here it will keep you on your toes for the rest of the game. The graphics are not bad for their time and for Snes in general. This implementation was originally supposed to be released on Nes. However, this decision was reversed in favor of the Super Nintendo. Square tried their best to update the graphics as best as possible, but they didn't spend too much time on it. The game is graphically better, but not as much as they hoped. However, the performance was good compared to other Snes games of the period. If you think otherwise, then I declare - do not let the graphics influence your thoughts about the quality of this game! Each character has his own traits that distinguish him from other heroes. All tracks perfectly convey the mood of the dangerous areas presented in the game. This part has an excellent system of all kinds of elements, spells, and secrets. You can spend hours trying to find them. It was very revolutionary for its time, unpredictable storytelling scenes were presented as if it were a movie. The dark knight Cecil, following the orders of his king, organizes a massacre in the kingdom of the magicians of Missidia. And then, through his fault, the settlement of the Summoners burns down. You should play for such a character. The plot twists and turns will simply drive the player to a dead end, and throw up all the new twists and turns, changing the composition of the team and the character of some heroes. Recommended for all RPG lovers!
The SNES system gave Square's artists and programmers a tremendous amount of leeway, and they were pretty good at it for pioneers in the field. What are at least these beautiful views from the mountains at some stages ... The well-known "Mode 7" was also tried, the first, for consoles, attempt to transition into three-dimensionality. Thanks to him, for the first time, the perspective and feeling of almost full 3D appeared when flying in air ships. The world of the game has become much more diverse than in the previous parts, the heroes have to travel not only through the familiar upper world, but also go down underground and fly to the moon (I especially like the landscapes and architecture on the moon). The SNES also allowed for a deeper sound, and Final Fantasy IV has a really nice soundtrack.
‹
›
Home
View web version