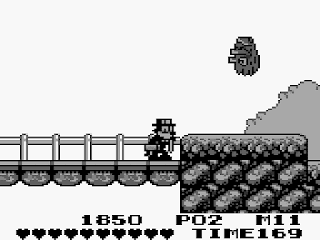 Genre: Action
Perspective: Side view
Visual: 2D scrolling
Gameplay: Platform
Published by: Electro Brain Corp.
Developed by: Hudson Soft Company
Released: 1993
Platforms: Game Boy, Nintendo (NES)
The evil professor wants to get a magic bag belonging to Felix, for this he kidnaps his beloved Kitty. The player, controlling Felix the Cat, must get to the professor's hideout and save his beloved.

The hero of the game can jump and attack opponents. Multiple press of the jump button is used for flight and swimming. The types of attacks vary depending on the magical stage reached by Felix. When the cat falls into the abyss or when the timer expires, Felix loses one life, regardless of his magical stage. Each magical stage increases the power of the weapon, and also, in most cases, provides new vehicles for movement.
Magic stages (except for the basic one) have a limited supply of energy, which decreases over time and is replenished with milk. If the energy runs out, Felix loses one magical stage.
‹
›
Home
View web version