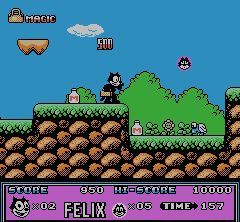 Genre: Action
Perspective: Side view
Visual: 2D scrolling
Gameplay: Platform
Published by: Hudson Soft USA
Developed by: Shimada Kikaku
Released: 1992
Platforms: Nintendo (NES), Game Boy
According to the plot of the game, the crazy Professor wants to get the magic bag belonging to Felix, for this he steals his beloved Kitty. We, when managing Cat Felix, must undergo a series of tests to save our beloved.Felix can jump and attack opponents. Multiple pressing of the jump button is used for flying and swimming. The types of attack vary depending on the magical stage achieved by the protagonist. When falling into the abyss or at the end of the countdown of the time-level set, Felix loses one life, regardless of his magical stage. Each magical stage increases the strength of the weapon, and, in most cases, provides a new transport for movement. Magic stages (except for the base) have a limited supply of energy, which decreases with time, and is filled with milk. If the energy ends, the character loses one magical stage.In the game, Felix will have to face many enemies. Among them are moles, tree trunks, cannons, birds, fish, and also 8 bosses. Some enemies can attack our hero from firearms. If the hero stumbles upon the enemy, and also if a bullet or other shell hits him, he loses one magical stage. Being in the lower magical stage, under the circumstances listed above, he loses one life.
The game has the following types of movement:
In total there are nine worlds in the game with three levels in each of them. Also at the end of each world (except one) Felix will meet with the boss."The first world is completely overland." For the victory over the boss is given 10 000 points.
In the second world, the first level is in the air, the remaining two are on land. For victory over the boss is given 20 000 points.
The third world consists of two land levels in the beginning, as well as an air third. For the victory over the boss is given 30 000 points.
The fourth world is first overcome by land, then by water, and in conclusion - under water. For the boss we get 40 000 points.
The fifth world is first overcome by land, then by air, and then again overland. For victory over the boss is given 50 000 points.
The sixth world includes a surface and underwater journey, the third level is absent. For the boss, the hero is given 60,000 points.
The seventh world is completely overland, and for the boss we get 70,000 points.
The eighth world consists of only one cosmic level and does not contain a boss.
The ninth, final world, completely overland. For victory over the boss is given 90 000 points.
Sometimes, in the transition between worlds, there is a telephone conversation between Felix and the mad Professor (in particular - before the beginning of the first, third, fifth, seventh and eighth worlds).During the trip, Felix can meet portraits of Kitty and the mad Professor. If you touch Kitty's portrait - 500 points are given, and if 7 times a glove is struck by a portrait of a mad Professor - one life is given. Not all portraits give bonuses. Additional life is also given for achieving marks in 50 thousand points, 300 thousand points and 500 thousand points. One of the important bonus elements of the game is a magic bag that can be found in every world. To get into it, you need to get on the bag from above and press the "down" button. Inside the bag are the portraits of Felix (usually 10 to 20 pieces), and in some cases - two large magic bags. The right bag is the shortest way to the end of the main level, and the left one - returns us to its original location.
Throughout the game there are portraits with the image of Felix. Collecting them is important, because:
The game "Felix the Cat" refers to the late generation of NES games. The graphics in it are not outstanding, but it is much better than in many other earlier 8-bit platformers. The worlds are very beautifully drawn and very detailed (if you take into account that the game was released for NES), and Felix does look great. But the drawing and detailing of enemies could have been better. The music is not bad, but the tracks are repetitive. Some of the songs are quite wow, you can listen to them even for several levels in a row, but some of the tracks even a little annoying (especially in the first level). The game is pretty simple in passing, but it's even more of a plus than minus, as the target audience for the product is small cartoon lovers. But even older players will be interested in playing "Felix the Cat", because the gameplay in it is simply awesome: what are at least the many transformations of the main character. And the game is very diverse, there are a lot of different enemies, as well as interest in the process of passage is constantly warmed up due to the constant change of the environment (overland, air, surface, underwater, space).
‹
›
Home
View web version