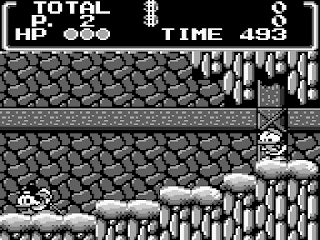 Genre: Action
Perspective: Side view
Visual: 2D scrolling
Gameplay: Platform
Published by: Capcom U.S.A.
Developed by: Capcom Co.
Released: 1990
Platforms: Game Boy, Nintendo (NES)
In the game, the player controls the drake Scrooge McDuck dressed in a black top hat, jacket and leggings, with a cane and pince-nez.
Scrooge McDuck is driven by a desire to take possession of treasures and become the richest drake in the world.
The plot of the game does not directly follow the storylines of the animated series, however, both in the game and in the cartoon, Scrooge McDuck travels to different parts of the world in order to find long-lost treasures. Taking Scrooge's love of travel as a basis, the creators added a lot of minor characters from the animated series to the game - such as Zigzag McCruck, Screw Razboltaylo (found at the bonus level), Duckbot (will help Scrooge get into the cheese bunker on the Moon), Mrs Kluvdia (gives Scrooge additional bonuses), the prehistoric duck Bubba (he can be saved at the "Himalayas" level), Webby, as well as Scrooge's nephews: Huey, Dewey, and Louie (like Webby, they help Scrooge by giving tips on how to complete the level). As enemies on the levels, there are the Gavin brothers, Magica De Spell, as well as the egocentric billionaire Flintheart Glomgold, who is Scrooge's main opponent and the main antagonist. The gameplay of the game dynamically combines jumping, climbing and descending the ropes, exploring the terrain and solving simple puzzles. Scrooge's main weapon is his pogo stick, bouncing on which he can climb higher, kill enemies and break some stones.
‹
›
Home
View web version