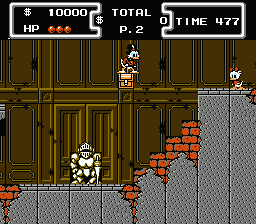 Genre: Action
Perspective: Side view
Visual: 2D scrolling
Gameplay: Platform
Published by: Capcom U.S.A.
Developed by: Capcom Co.
Released: 1989
Platforms: Nintendo (NES), Game Boy (GB)
A popular game about the adventures of Scrooge McDuck, greedy and multimillionaire, is known to us as on the Disney cartoons. The creators of game Capcom did not split hairs too much to the gameplay, making it simple and interesting at the same time. Scrooge will visit several levels: Amazonia, Transylvania, African mines, the Himalayas and the moon (at which it moves freely without suit). Interest in one of Scrooge - to collect as many precious stones that are scattered through the levels in abundance (they come in three types - small yellow, large yellow and big red), and get the treasures that are held in the hands of treacherous bosses. In addition, Scrooge assistance given to replenish energy and invulnerability for a dozen seconds. Weapons at the one and only uncle - his cane. With it, he can jump high and, of course, peel assorted enemies. Also walking stick can break rocks, and some other obstacle. During the adventure Scrooge could use the help of friends and relatives who are at the levels and provide its useful (and not) advice. As for the graphics and sound, the game looked very good for its time, especially appreciate the music. In the game three levels of difficulty.

Selecting the stage on the map:
Arrows - specify,
A - confirm the selection.
In Game:
A is a jump;
B is the blow;
↓ + A + B - high jump with a cane down;
You are given a choice of five little-known areas in which treasures are hidden:
- The Amazon;
- Transylvania;
- African mines;
- The Himalayes;
- The Moon.
You leave the hospitable Duckburg and with some surprise notice that the respected Mr. McDuck is somehow lightly equipped for such a difficult and dangerous journey - just a cane. But in skillful hands and a cane is a formidable weapon and capable of inflicting mortal blows on the enemies!
Uncle Scrooge deftly uses the fact that he can fly. Most of the enemies he kills with blows from above. But most importantly, by this method, he breaks the chests, which, it turns out, are simply filled with these places on Earth and even on the Moon. And in the chests, countless treasures, not only increasing the state of Uncle Scrooge, but also giving him extra lives and even making him for some time inextricable.
But the duck is not an eagle. And Mr. McDuck is not able to jump on top of every enemy, not to take off every wall. To overcome such obstacles, Scrooge uses a paw to strike. And in especially difficult cases, he comes to the rescue robot Gizmo Duck, who can blow up any wall.
Scrooge thinks he travels without nephews, but they follow him on their own and, although often in unpleasant situations, sometimes give McDuck useful advice on where to go or what to do.
From time to time, Zigzag arrives, known for always landing, and invites you and Scrooge McDuck to quit all these treasures and return to Duck City. If the journey has already exhausted you, in response to his question, press the "A" (Yes) button. If you are ready to continue traveling, click "No".
Here in such a company, with losses and finds, you go through stage after stage, fighting with monkeys in the Amazon, skeletons in Transylvania, bats in African underground caves, mountain goats in the Himalayas and aliens from a flying saucer on the Moon. Each stage ends with a duel with the treasure hunter, who can not be beaten with one blow. But the victory over him brings Scrooge and you a lot of money in hard currency. In general, to have money in this journey is very useful. Even incorruptible Inka in the Amazon will open the door for you at an appropriate price. Consider this when you return from the moon to our sinful land.

If you were returned from the African Mines to Transilvania for the key (Skeleton Key), then find the mirror that stands on the ledge above the knight's armor, approach it, and you will find yourself in the room where the chest and two mirrors are located. Break the chest, take the key, go to the left mirror and ... choose the country!
In the jungle you will be offered a statue to buy a lift for $ 300,000. But you can climb up, jumping on a guard stick and catching the rope. So it will be cheaper.
In the final battle with Dracula there is an opportunity to replenish the stock of lives once. To do this, press SELECT.
If you collect more than 10 million, then Scrooge will not be a box of gold, but a whole mountain of gold, and the medal will get more.

How to reach the premium stage

In order to achieve the hidden Premium stage of "Duck Stories", wait until the amount of your money reaches 70,000, and then find the Rocket Launcher. It will take you to the premium zone in the clouds, where you can purchase additional diamonds.

Use this technique to earn a couple extra lives (1UP) in the African mine. Enter the Mine. Go down the chain and jump down next to the coal box. To your left is an imaginary step with the Scrooge Doll. Personifies life. When you take her down the chain to the left until you land on the coal chest. If you jump up and to the left, you can jump over three invisible treasure chests and go through the secret passage leading to the hidden Kukle Scrooge. Having received these two lives, you can take them again. If you find the Rocket Launcher, fly back to the Duckburg. And then go back to the mine and repeat the procedure. To overcome the marshes and get to the rocket launcher, jump up from a small islet beyond the place where marsh creatures first appear, and go right to the secret passage.

Another Loop of Lives

This cycle will allow you to bring the reserve of lives to a maximum of nine. Go to the African mines without a key, and you will be transferred to Transylvania. Take the very easily accessible 1-UP in Transylvania (in a treasure chest suspended above Mamochka's head in the first upper corner of the mansion). After you have gotten your life, go to the room with the Skeleton Key, but do not take the key. Return to Duckburg, and from there again to the Mines and Transylvania. 1-Up will reappear. Repeat this procedure until you collect nine Ducks, then take the Key and continue that game.

How to get a huge pile of treasures

Money is not the key to completing the "Duck Stories", depending on their number depends which of the three different endings you will see. The more treasures you have, the greater the mountain of treasure waiting for you in the final scene!
‹
›
Home
View web version