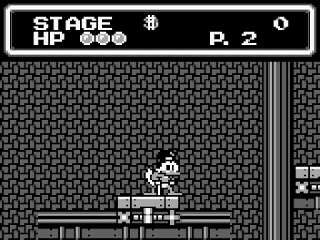 Genre: Action
Perspective: Side view
Visual: 2D scrolling
Gameplay: Platform
Published by: Capcom U.S.A.
Developed by: Capcom Co.
Released: 1993
Platforms: Game Boy, Nintendo (NES)
The game is a platformer in which the player controls Scrooge McDuck. Scrooge moves through the levels, eliminates enemies with a cane jump and collects jewels that give extra points. If Scrooge comes into contact with enemies, then one unit of energy is taken away from him, and he becomes invulnerable for a while. If the number of units of energy becomes equal to zero, then one life is taken away. If the number of lives becomes zero, then the game ends and the player goes to the title screen.
As you progress through the game, Screw Razboltaylo gives Scrooge 3 modifications to his cane, allowing him to go to previously inaccessible places - the ability to break bricks by jumping, hitting and dragging heavy objects.
At the beginning of the game, the player chooses one of five levels. At the end of each level, the player fights with a boss, after fighting with which, he receives one of five artifacts.
Between the levels, you can visit the store, where you can buy various useful items for the money received during the passage of the levels: a cake to replenish life points, a safe to save money in case of loss of life, an extra life, an additional continuation, and additional life points.
A piece of the map is hidden at each level. If the player manages to find five fragments (and buys another one in the game store), then Scrooge will collect an ancient map, after which a secret level will appear on the game map - a dungeon of a castle in Scotland, after passing which the player receives an ancient artifact - a ruby with the image of Fergus, great-great-great-grandfather Scrooge, which will be shown at the end of the game. If the player cannot find all the pieces of the map and get this artifact, then Scrooge at the end of the game will say that he could not find the treasure. There is also a third ending: if you finish the game with $ 0, then the McDuck Ruby goes to Flintheart.
The player is free to pass the levels in any order, however, there is an optimal sequence of passage that allows you to unlock inaccessible areas with the help of previously obtained cane modifications.
‹
›
Home
View web version