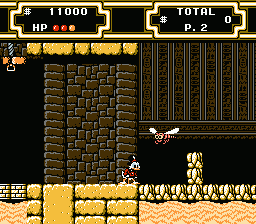 Genre: Action
Perspective: Side view
Visual: 2D scrolling
Gameplay: Platform
Published by: Capcom U.S.A.
Developed by: Capcom Co.
Released: 1993
Platforms: Nintendo (NES), Game Boy (GB)
Continuing adventures of Scrooge McDuck by Capcom. Game one time confidently in the lead in the popularity ratings. One of the nephews of the estate is in the basement of a piece of old maps. It turns out that the great-great-great-grandfather McDuck hid the legendary treasure of the family in some mysterious place. One piece of the card already there, one can buy at the store for the modest sum of one million dollars (sold more useful things like extensions, safes and lives), and the rest will have to look. The inventor Vint helps Scrooge, improving the properties of sticks, so that it would break the hitherto strong stones. In order to find the parts of the map, it is necessary to express powers of observation, searching for hidden passages in the walls and exploring secluded places.