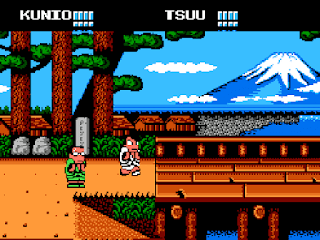 Genre: Action, Role-Playing (RPG)
Perspective: Side view
Art: Anime / manga
Gameplay: Arcade, Beat 'em up / brawler, Fighting
Published by: Technos Japan Corp.
Developed by: Technos Japan Corp.
Released: 1991
Platform: Nintendo (NES)
In 1991, only one game about Kunio-kun was released on NES, and it was very different from the whole series. Undoubtedly, the parallels lead to the game "Downtown Nekketsu Monogatari", released in 1989, but now the events take place not in the vicinity of Japanese schools of the late 20th century, but in the vastness of Japan during the time of samurai prosperity. The company decided to make a purebred Japanese game. And, I must say, they very much succeeded in transferring the player to the past. But the game turned out to be controversial, having both advantages and disadvantages.
Well, you can start with a logo that doesn't really exist. Even so - it does not exist AT ALL! This is probably the only NES game that does not have a title screen with the name of the game. Physics is kept at a high level, as in the game mentioned above. Music is also, as always, on top. Each territory (and there are ten of them in the game, from cities to deserts and swamps) has its own melody. And when the bosses appear, the music changes to disturbing and dynamic. But the graphics unexpectedly blundered ... There are a couple of successful locations (especially swamps with a sunset), but most are just something twisted, mixed, square, abrupt, chaotic and incomprehensible. Well, damn it, some of the surroundings are inferior in beauty even to the levels from the Mario games. Fortunately, other resources of the game keep the atmosphere in the right tone, and subsequently, these locations, stuck together on the knee, become boring to the eye and do not irritate the eyes.
Yes, actually, about the game. In principle, its format is similar to "Downtown Nekketsu Monogatari". You fight bad guys, running into different shops along the way and pumping your Persian with all sorts of items and food. The only difference is the charm of the game. The main innovation is that you always have a partner. And after defeating some bosses, they can join you. So then you will have some choice of mercenaries with whom you can continue your journey. The peculiarity of this game is that you have at your disposal a whole maze of Japanese territories, which are not connected with each other linearly, as in its predecessor in 1989. Without buying the ability to navigate the map, it is very easy to get confused and disorientated among the many fields and ponds.
Another feature of the game is that there are almost more hidden shops here than there are public shops in the city and in the market. And without purchased things at a difficult level of the game there is nothing to do. Speaking of money. In this part, it became possible to place your own money and make an even-odd bet. It was a fatal mistake of the developers - to give the game the ability to replenish the account in this way and the ability to save.
The developers were still stingy with animation. This also applies to the plot, where the ending for such a bright and extraordinary game is very mean and simple, as well as game moments. For example, the game has hotels where you can relax and replenish your health. You just rest for a second, without even sitting down on a chair, not to mention the bed in a separate room. You are stupidly told right away that you have rested and that's it. It seems to me that such connivance is not forgivable for animators and artists.
In terms of settings, the game has become more advanced. In the main menu, you can still choose single or double play and the ability / impossibility of harming your partner. But in the game itself, in the pause mode, there are much more opportunities: a shopping window, a status window (10 player parameters!), A pumping window (where you can change the level of development according to different characteristics of a character), a window of learned special techniques, recording achievements in the game, setting the behavior of your partner , setting the difficulty of the game (9 positions!), the speed of subtitles, the course of the game, water effects, a set of techniques for enemies. As for NES, a whole arsenal of settings!
The same arsenal of possibilities is in the game. In addition to various special attacks, you can fly through the air, use a map, transform into another samurai. Add here all sorts of weapons: stones, blades, buckets, carts, etc. It should be noted that the game turned out to be addictive. Wandering through the cities and deserts in search of gangsters, simultaneously pumping equipment and strengthening your health is an exciting business. The sophistication of the game adds freedom of action - you can literally walk in all four directions. The main thing is not to fall out of the screen during the battle, otherwise you will have to look for the gang again and deal with it anew.
Of course, there is much less fun in Japanese, but good people have already translated the game into English a long time ago, and we know that first we are looking for a remedy for poisoning, and then we will save the kidnapped girl. Pass and have fun for everyone who hasn't played!
‹
›
Home
View web version