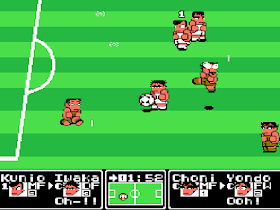 Genre: Action, Sports
Perspective: Side view
Gameplay: Arcade, Fighting
Sport: Football (European) / Soccer
Published by: Technos Japan Corp.
Developed by: Technos Japan Corp.
Released: 1993
Platform: Nintendo (NES)
Crazy football by crazy rules with the public's favorite Kunio-kun at the head. You can not count on a serious game here. But you can count on excellent graphics, hilarious scuffle, humorous characters, and the atrocities of the elements on the field (lightning can strike and everyone standing in a puddle will be electrocuted; or a hurricane wind that has risen can suddenly lift several players into the sky). Also, the ball can break through the gate, knock the player down, and the ball can be drowned, and this is not all the delights of the game. You will have to play not only on the grass, but also in the mud and even on the ice. In addition to standard punches and kicks, jumps (on the ball or on an opponent), there are also special techniques. Each character has his own superpunch (this time - only on the ball), which can demolish the goalkeeper and break the net. You can play together for one team. Game variations: Nintendo World Cup, Nekketsu Koukou - Dodgeball Bu - Soccer Hen, Kunio Kun no Nekketsu Soccer League. Also known as Goal 3.
\
‹
›
Home
View web version