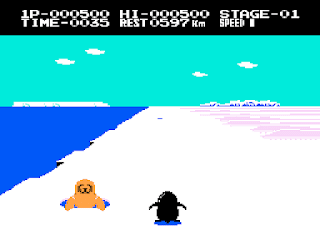 Genre: Action
Perspective: Behind view
Gameplay: Arcade
Published by: Konami Industry Co.
Developed by: Konami Industry Co.
Released: 1985
Platform: Nintendo (NES)
"Antarctic Adventure" is a simple but dynamic arcade game. We control a penguin that crosses the vastness of Antarctica, getting from one base to another. The open spaces, unfortunately, are not empty - there are many crevices and ice holes on the way, and walruses sometimes interfere with jumping over them. The only joy is the fish, which gives extra points. You can also get points by collecting flags. Some of them flash, picking them up, you can fly over several obstacles at once.
‹
›
Home
View web version