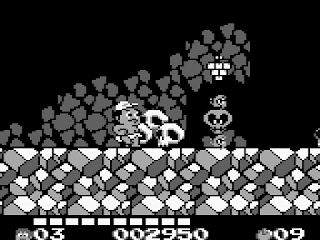 Genre: Action
Perspective: Side view
Gameplay: Arcade, Platform
Published by: Hudson Soft USA
Developed by: Hudson Soft Company
Released: 1993
Platforms: Game Boy (GB), Nintendo (NES)
Compared to the first part of the game, the gameplay has not changed much. The character can accelerate, jump, and also attack enemies with weapons that are in the eggs located on the levels. There is a time limit; to increase the value on the timer, you need to collect fruits or meat. To go to the next island, you must defeat the boss.

A warehouse inventory has been added to the game, now, before the start of each level, the player can take a weapon or an assistant dinosaur from there, or, on the contrary, place the items found on the previous level there. Stone Hatchets do not transform into Fire Knippels: if you pick up a second Hatchet, it will automatically be added to your inventory. In addition to weapons, the player can find at the level of one of the four dinosaur assistants, which are indicated by card suits. Then the hero turns into a rider and continues to move through the level, using the abilities of the assistant. Upon contact with an enemy, bonfires, thorns, etc., the dinosaur dies, and Master Higgins, if possible, must complete the level alone.
The skateboard is no longer carried over to the next level and is not saved in the inventory. At the end point, it disappears and the player is added 2000 points. Every 20,000 points give life. Between the levels, the character enters a special room, where a rotating ring of eight eggs appears. The player is invited to make a random choice, with the ability to get from 50 to 2000 points, or life.
The checkpoint system is now absent. If the hero dies, then the player must go through the entire level again; the levels themselves, in comparison with the previous part, have become shorter. There are underwater levels and levels with vertical scrolling. This is the only part of the game where you can move backwards on horizontal levels, but only to certain points.
There are about ten locations on each island, while the starting point and location of the boss are initially known. During the game, there is a random and player-independent movement along the points on the map from the starting position to the boss. However, some locations will not be visited. However, if the hero dies in the battle with the boss, then the boss will move to one of the previously unvisited points on the map, and the player will need to go through the current location again to fight again, and then complete the level at the point where the boss moved. If the hero dies again, the boss will continue to move around unvisited locations on the island until there are none left at all. If all attempts are wasted, then the player will have to start the process over. The number of sequels is not limited.
If the battle takes place with an assistant, the hero will get off him, and there will be two characters on the screen that the player can control in parallel. The advantage of the assistant is that in this battle he is invulnerable, he can also attack, and, in addition, he distracts all the boss's attacks on himself. If the hero reached the boss without a weapon at all, then it can be obtained on the battle screen.
‹
›
Home
View web version