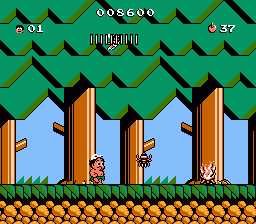 Genre: Action
Perspective: Side view
Visual: 2D scrolling
Gameplay: Arcade, Platform
Published by: Hudson Soft USA
Developed by: Hudson Soft Company
Released: 1992
Platforms: Nintendo (NES), Game Boy (GB)
And the third time a fat-hero has to save a girlfriend. Already, the aliens on a flying saucer, having pozarivshis to beauty, kidnap it directly from under the nose of a plump chevalier. Tom is no longer getting used to it - as before, he constantly pursues scoundrels, eating fruits on the run. Differences from the previous part are not so many: it became slightly better than the schedule; There was one more, fifth, dinosaur; The hero learned to crouch; A couple of new prizes; In the rest everything is like in the second game.

The distant and difficult path is for Rob. No life is enough to overcome it. Therefore, Robi takes as many as four. It would be nice to have weapons - the islands of the archipelago clearly do not look uninhabited - but, alas, it will have to be mined on the way.
So, start the journey (button START) on the island of adventure. The first thing that Roby sees with astonishment is some kind of a board of eight empty eggs and the inscription EXIT (Exit). Pushing the joystick, Robi can drive the pointer-point from egg to egg, but the meaning is not yet detected. "Then I'll figure it out," Robi decides and press START again. He is on the shore of the island, unarmed, and gently starts to move forward (joystick →), easily jumping (button A) through small stones and other uncomplicated obstacles. The sun is shining, the birds are singing, there are no dangerous animals, Robie is looking forward to a light walk and ... dying!
And when he was resurrected (remember about the stock of lives?), He, first of all, decides to analyze the situation. Of course, at the beginning of the journey, he saw 11 sticks on his head, which alternately disappeared, until the last one disappeared in the dying instant. "This is the time of my next life," guessed Roby, "now I will collect all the fruits and berries along the way to replenish my strength."
More than Robi does not benign, knowing that from the insidious island one can expect any trouble, and finding in the egg hatchet, caught on the way by the egg, immediately applies it against counter poisonous snails and birds of prey (button B). So he successfully reaches the end of stage 1-1 and again finds himself at the scoreboard of eight eggs. Now, Roby understands his purpose - it's a weapon warehouse! If you press button B, the tomahawk that Roby produced in the first stage will be stored in one of the eggs in the warehouse, and pressing button A, Robi can take it again. "The same applies to any weapons that I can get," exclaims Robi, "and I can choose the most effective weaponry to overcome the next stage!".
Yes, Rob, you're absolutely right. And this is not just a warehouse of weapons, tomahawks, boomerangs. This is also a system of communication with your friends, which you will get on the trip: a pretty dinosaur (he is hidden in an ace in the peak at the stage 1-2), a mighty buffalo (ace of crosses at the stage 2-4), a turtle (ace of bubbles in stage 1 - A) and many others. Know that while you are with a friend, you are not killed. But you must also protect your friends. If you are underwater journey (stage 1-A), do not take a dinosaur with you - it will drown. It's better to sit on the turtle and swim on it, not being afraid of air bubbles, it will protect you.
It takes a lot of time and lives for Roby to acquire enough weapons and loyal helpers. A lot of other surprises await him on his travels. Much depends on Roby's ingenuity, and not only on courage and speed of reaction. Here at the stage 1 -2 there is an entrance to the secret cave. Entering it, Robey will not only take possession of a new means of protection - a crystal, but will also prove to be like a knight at a crossroads: to the left you will go - six steps you will pass, to the right you will go - only five stages. Choose a shorter path? The decision depends on the purchases that Roby has, because on a short journey he will have to underwater (1-A) and heavenly (1-B) travel. Yes, and surprises, including unpleasant, at these stages more. However, on the other road, the road by land can not do - stage 1-4 is also underwater.
Whether long, shortly, but reaches Roby to a stage 1-6 - up to that place over which the flying saucer jumps boldly. Our hero is ready to fight with aliens, but their cunning knows no bounds. Robi is lured into an ice cave, it is attacked by eared kangaroos and extraterrestrial animals on wheels, and at the end a shimmering dragon awaits.
And having defeated them, Robi will see how the flying saucer, which steals his bride, as if mocking him, will fly to another island.
‹
›
Home
View web version