Tom and Jerry in Fists of Furry (N64) 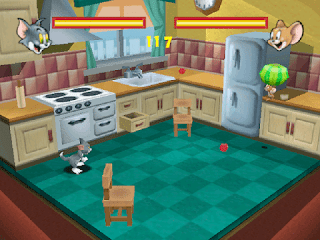 Genre: Action
Perspective: 3rd-person
Gameplay: Arcade, Fighting, Platform
Published by: Mattel Interactive, NewKidCo
Developed by: VIS Entertainment Limited
Released: 2000
Platform: Nintendo 64 (N64)
If we see Tom and Jerry, then we are guaranteed fun. So this time the premonition did not change us. Before us is a fighting game from a series of games about the adventures of Tom the cat and Jerry the mouse. In this "epic" battle, the heroes already familiar from the TV series will come together, in one word "friends" of our heroes. No one before could have imagined a fight between the mighty dog Spike and a little duckling, or, for example, that Spike's son Tyke would "lather" our Tom's neck, now it is possible. All battles take place in locations directly associated with each of the heroes, be it a farm or a courtyard where the ill-wisher Tom's booth is located. To make the battles more reckless, the game provides for a variety of weapons, which can not only "hit" the opponent well, but also shoot something heavy at him. Plus to all of the above, the game is saturated with bright colors, which cannot but please.
‹
›
Home
View web version