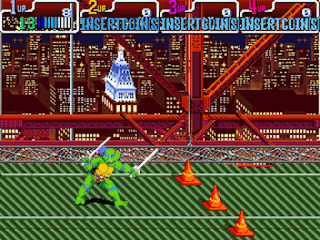 Genre: Action
Perspective: Side view
Visual: 2D scrolling
Gameplay: Beat 'em up
Narrative: Martial arts
Published by: Konami Industry Co.
Developed by: Konami Industry Co.
Released: 1991
Platforms: Arcade Machine, Super Nintendo (SNES)
Surely you know this game from the port on the SNES console, in which as many as 4 levels are added. Well, okay, but the arcade version can be played by four people! Colorful cartoon graphics, animation, as well as a variety of techniques will leave indifferent only the refrigerator. Krang again makes a bad smack and stole the Statue of Liberty. Tell me, what do turtles care about statues? However, this very much worries our lady of the heart, April, to whom this story shines with a promotion. And who knows, maybe it is your victory that will determine her chosen one and their future family happiness.
‹
›
Home
View web version