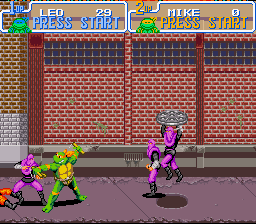 Genre: Action
Perspective: Side view
Visual: 2D scrolling
Gameplay: Beat 'em up / Brawler, Martial Arts
Published by: Konami
Developed by: Konami Co.
Released: 1992
Platforms: Super Nintendo (SNES), Arcade Machine
Teenage Mutant Ninja Turtles IV Turtles in Time - the game is ambiguous. Konami in the creation of beat`em-up `as usual does not bother. If you glimpse all of their arcades from NES to SNES, you can see with your unaided eye - the same thing, the same thing. Sad and sad. The same monsters, the same ninja, the same bosses. Turtles courageously wield their tools of labor, occasionally using "magic", which costs one "helsa" ... It's boring ... Nothing has changed since the days of Dandy. Even the levels. The levels are the same as in TMNT 3. No, the backs of course are different, but that's in fact ... It's a pity. But what is it I'm all about the bad and the bad ... Actually, in addition to the dreadful nostalgia for the Dandy (which may well be considered a plus), there are no minuses in the game. TMNT 4 is the top of "kill-them-all" about turtles. A polished masterpiece. Everything from blows to "fooling" is done at 5 with a plus. Young heroes toss the villains into the screen, beat them all that comes to hand, make killing kata. Finally, the bosses have become really cool, they use their branded superstores competently and impressions that the complexity is artificially overstated (usually this is done by increasing the lives of enemies) does not arise. A game for all time! However, about everything in order.

This is it! It's the same! Feeling familiar from childhood. The smell of the new prefix like in the air. The game is good because it is not overloaded with enemies, the enemies themselves are not too strong, the complexity grows gradually ... It's nice to play! You play without nerves, taking into account the possibility of saving (hehe-heh!) The game is played for the evening, but it's worth it. Play together in 2 happy is more interesting. Well, in games about turtles it always was.

Classic! Actually in the cartoon (and comics), similar incidents in almost every series are encountered. Someone was kidnapped, someone was framed, someone was sent somewhere, they decided to seize the world ... In our case, everything begins with the theft of the Statue of Liberty. What am I talking about? Spit on the plot! This is not JRPG for you! You play for your beloved from childhood bugs. What else do you need ???

1992 year. Have you seen other games this year? Well, look at that! TMNT 4 covers them all like a bull sheep! Excellent animation this time. Colorful backdrops are two. Really cute enemies are three. The game was ported from the machine, so it looks very, very decent even at the level of mid-90's games. I'm silent about something that is not visible in the screenshots - in action all this meat looks unmatched!

They are talking! When they shout "kawabanga" when they hunt pizza ... Before the level, you can hear a speech ... Do you often hear a speech on 16-bit? That's it! Saying something about sound effects is meaningless, they are exactly what should be on the sound processor SNES! And he is working at 100%, because the game is also musically implemented on "excellent"! Tracks are not many, but they play a theme, there is no desire to turn off the sound even at the twentieth passage.

Severely? Yes, the game is great. Yes, these are the best "turtles" on low-power consoles. But I want something more than polished gameplay and licked graphics I want ... Well, at least other levels, or ... But still I repeat - if you did not play Teenage Mutant Ninja Turtles IV Turtles in Time, I do not even know if you can be called an em-gamer.
‹
›
Home
View web version